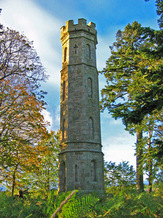 Drumoak, a parish partly in Kincardine, but chiefly in Aberdeenshire, traversed by the Deeside section of the Great North of Scotland, with Drum and Park stations thereon, 10 and 11 miles WSW of Aberdeen, under which Drumoak has a post office.  It is bounded N by Echt and Peterculter, SE by Peterculter, S by Durris, and SW by Banchory-Ternan; and rudely resembling a triangle in shape, with apex to ENE, it has an utmost length from E to W of 5½ miles, an utmost breadth from N to S of 3½ miles, and an area of 7401¼ acres, of which 20211/3 are in Kincardineshire, and 164¼ are water.

The broadening Dee flows 4¼ miles east-north-eastward along all the boundary with Durris; and Gormack Burn 53/8 miles eastward along that with Echt and Peterculter, to form with Leuchar Burn the Burn of Culter, which itself for ½ mile continues to separate Drumoak and Peterculter.  Towards the SW the shallow, weedy Loch of Drum (6 x 21/3 furl.) lies at an altitude of 225 feet.  Sinking along the Burn of Culter to 123, and along the Dee to 82, feet above sea-level, the surface rises to 350 feet on Ord Hill, 414 on the central ridge of the Hill of Drum, and 254 at the parish church.  Gneiss and granite are the prevailing rocks; and the soil, light and sandy along the Dee, elsewhere ranges from good black loamy on the higher southern slope to gravelly and moorish overlying moorband or retentive blue stony clay.

Nearly a fourth of the entire area is under wood, over a sixth is pastoral or waste, and the rest is in cultivation.

James Gregory (1638-75), the greatest philosopher of his age but one, that one being Newton, was born in Drumoak, his father being parish minister; and so perhaps was his brother David (1627-1720), who himself had a singular turn for mechanics and mathematics.  Arrow-heads, three stone coffins, and silver coins have been found; a curious sculptured stone was transferred in 1822 from Keith's Muir to the top of Hawk Hillock in the policies of Park; but the chief antiquity is the Tower of Drum, which is separately noticed, as likewise are the mansions of Drum and Park.  Five proprietors hold each an annual value of more, and 3 of less, than £100.