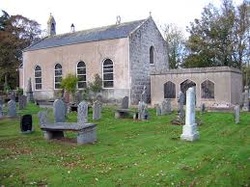 The settlements of the Durris area are widely scattered and include Craiglug, Woodlands of Durris, Denside of Durris, Kirkton of Durris, Crossroads, Blairydryne, Lochton and Darnford.  The most substantial of these is Kirkton of Durris.
The name “Durris” comes from  dorus (Gaelic - a door or opening), which in fact it was - for Durris lies at the northern end of the Crynes Corse Pass over the Mounth.

Much of the area of Durris is covered by Durris Forest.  This is managed by Forestry Commission Scotland, with input on a partnership basis from the Friends of Durris Forest on matters of leisure and educational use.  Durris Forest is one of two popular forests offering mountain biking (the other being Fetteresso Forest) accessible from the A957 Slug Road which joins Banchory and Stonehaven. In fact, the Slug Road separates Fetteresso from Durris.  The Durris transmitting station is a broadcasting and telecommunications facility, also situated within Durris Forest.

Durris Primary School is situated in the parish of the same name in Lower Deeside. The school itself is in the hamlet of Woodlands of Durris some seven miles Southeast of Banchory and twelve miles from the city of Aberdeen. The school catchment area lies between the River Dee in the north and Durris Forest and Fetteresso Forest in the south. It passes westwards through Northbrae Plantation, Mulloch and over Garrol Hill while the boundary on the east is by way of Craiglug, Corsehill and Trees.  There is also a Nursery in Durris called Crossroads Nursery.

The Old Bridge of Sheeoch is located just upstream from the South Deeside Road bridge at the Kirkton of Durris. It has long been used as a pedestrian crossing of the Burn of Sheeoch. Historical accounts give evidence that there was some sort of crossing there for almost a thousand years.

Sir William Wallace Scotland’s national hero was brought, in 1297, to Deeside.  No complete record of his activity on Deeside survives, but this is understandable as his tactics were of guerilla warfare and concealment.

However, his initial success in the North East was to capture Dunottar Castle and to burn to death the English garrison by torching the chapel. He then crossed the Mounth - probably via the Crynes Corse route - to reach Aberdeen. Although he failed to capture Aberdeen Castle, he created such havoc in the port that the English garrison could not escape by sea.

Wallace was on Deeside again in 1298, but little is known of his movements for that year.

Durris contains about 495 electors and 252 households.